Student of Brno University of Technology was a judge on F1 in schools, World final in Austin, Texas.

This blogpost is translation of article which was in the student magazine of my university.

The most talented high school students from all around the world came to USA to compete in racing with formula one car in smaller scale.  Peter Bouchal from Brno participated as the judge for second time.

World final F1 in schools, Austin, TX hosted more than 30 teams from more than 20 countries and it was a great opportunity for young students who were interested in Motosport, automotive indurstry or Mechanical engineering. I think “this is one of the best engineering competition for high schools students in the world, participants of F1 schools can touch real life problems, manufacturing, team work and much more. ” As said by 24 year old Petr Bouchal who participated in this competition in year 2010 in Singapore with team from Prerov. They won regional round and then the national round, on world final they bagged the 4th fastest car.

In Texas there were 39 teams and for the first time also, teams came from Peru and Romania. Students designed, tested and made 25 long F1 car from special foam. Beside that also they found sponsors and make marketing for their teams. Petr Bouchal like last year was a judge for verbal presentations, student presented to judges develompent of a car, innovations on the car or finance side of their projects.

„It‘s amazing to see young teams apply for competition, who designed racing cars and then race it. Petr Bouchal who was a first Czech judge in this competition on World final said “I really like to see competition from other side, because it was 6 years ago when I was a student, this help to provide feedback for future engineerings and they can keep going in bright carreer”. 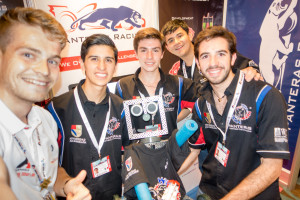 Whole event is for 6 days and graduated with Formula one race. Winner of year 2016 is a team from Greece. I appreciate the chance to being a judge on world final and also thanks to city Brno and Brno University of Technology to get on World final.